Home » Who We are » Organization » Yvonnick Jambon

Yvonnick Jambon was appointed as the Group’s Chief Executive Officer (CEO) in January 2022 following on from Dr Khosro Khodayari who had held the position for 21 years.

Yvonnick has been in the Agricultural business for 20 years. He graduated from AgroParisTech and then started work in the Crop Protection Industry in 1998 as an agronomist.

In 2017 he joined Acceres as Chief Executive Officer setting up this new company with acquisitions of GAB Consulting, Promovert and Biotek Agriculture Europe. After the acquisition of SynTech Research and the merger with Acceres, he became EMEA Director of the new Group. Prior to joining Acceres, Yvonnick worked with Aventis (Bayer), Groupe Roullier, and Nufarm as Director of Ag Business Europe. He also worked for Aventis (Bayer) and Nufarm in the USA and Canada in senior management positions.

Yvonnick can be contacted at: yjambon@syntechresearch.com 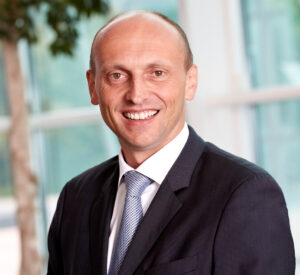