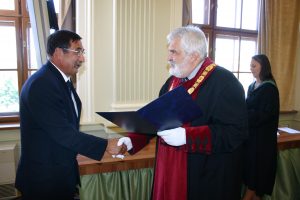 Dr László Sándor Hódi is a Senior Research fellow with SynTech Hungary, based in Hódmezővásárhely, Hungary.

The Council of the University of Szeged, Hungary has recently made Dr. Hódi an Honorary Professor of the College.

Dr Hodi has a PhD in Plant Production and Horticultural Sciences at Pannon University, Veszprém, Hungary. He specialised in Weed Science and later became Head of Department, University of Szeged Faculty of Agriculture, Hódmezővásárhely. In 2002 he became Vice Director of Plant Protection and Soil Conservation, Agricultural Office of Csongrád County, and later Director of Plant Protection and Soil Conservation in the Government Office there.

Dr Hodi as a lecturer at the University of Szeged and at Szent István University, Faculty of Agricultural and Environmental Sciences, Szarvas, Hungary.