The FCI Trade Summit which took place in Buenos Aires on 16 – 19 August attracted more than 500 attendees, 65 exhibitors and 20 sponsors from 30 countries. The event had a good mix of international manufacturers with South American distributors and formulators.

As one of the sponsors of the Summit  SynTech was introduced to the audience by Magdalena Zingoni, SynTech Research’s Latin America Regulatory Manager the opening of the morning session. There was also opportunities to present SynTech’s regulatory service and facilities in Latin America. 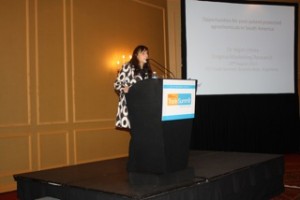 SynTech was represented at the event by: Laura Martino – regulatory advisor and QA and Ma. Ines Zingoni – Argentina Regulatory Advisor